What Is Hugelkultur Gardening? 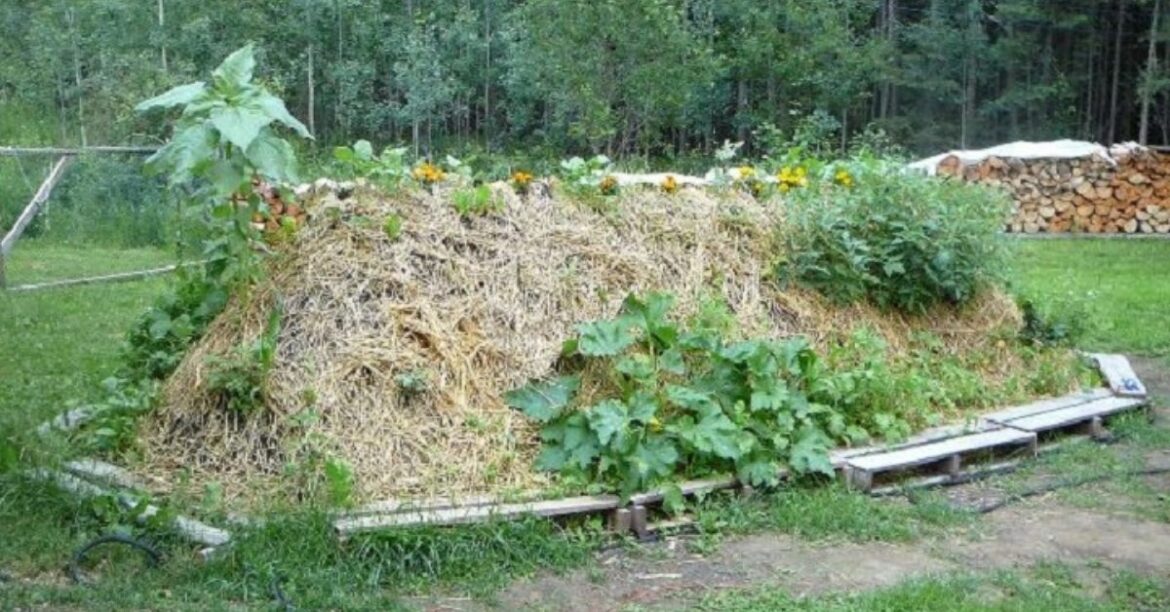 Hugelkultur is a German word meaning hill culture or mound culture. It has a history going hundred of years back, and it has always being used in both German and Eastern European societies as a way to utilize the available plant biomass material around us. Effectively, composting it down into the soil, sequestering the carbon, and allowing for the growth of plants, creating a more drought-tolerant raised bed that will continue to build the soil.

What Exactly Is Hugelkultur?

Hugelkultur is a sustainable gardening technique that used rotten wood and fallen branch to retain moisture and provide nutrients for your plants. Originated from Germany, these mound shapes raised beds are built by creating layers of wood logs, branches, wood chips, leaves, compost heap and covered with topsoil. It is a special gardening method which doesn’t require much fertilisation and irrigation.

Hugelkultur is implemented in permaculture projects. Hugelkultur beds can vary in size and shape. However, in this post, we will take a look at a practical and basic step in setting one up and look at the benefits of hugelkultur.

What Are The Benefits Of Making a Hugelkultur Bed:

This is because as the wood inside breaks down, then any rain that comes, any watering you do is going to soak into the wood and soak into the debris that’s breaking down. And it’ll hold it because it’s very rich in microbial life and all that’s going to hold the water and slowly over time it will release up to the roots of your plants that are planted above. So, it is great for a drought area and you’ll need less watering.

2. Provides Nutrients For Decades Depending On The Size

It produces a lot of microbes and the microbes you feed the plants all of the nutrients that are in the soil and that could be 25, 30 years even for the really large ones.

3. They Are A Great Way To Use Up Green Waste

So, with hugelkultur, you’re not burning piles, you’re not sending them to the dump, you’re not letting them turn to dust and just blow away so, you’re bringing all the stuff that’s otherwise just waste and you’re up-cycling and recycling it into a raised bed garden and I think that’s one of the coolest benefits.

4. You Can Have Your Garden Right On-Top Of The Mound

You can plant your garden on top of it immediately after you make the mound. So, I’m pretty impatient so, I like to just plant it immediately and propagate whatever I can into it. Also, as you use branches on the upper layers, this provides good root support for the plants to grow and can help if you have a windy environment. It can help stabilize the plant and the roots like to grow into them and gives them a lot of support.

5. It Aerates The Soil As The Woods Break Down

How To Make A Hugelkultur Bed:

Now, there are different ways to build a hugelkultur, and it does depend on your location, what you have available to you on-site, the slope of your landscape, and the goals for your property. I turned to hugelkultur initially because I had an abundance of organic biomass material coming off some of these larger ornamental trees in the yard that was there before I arrived.

After looking at all the options, I concluded that the best way to harvest those organic materials with the least amount of work and at the least expense was hugelkultur.

Initially, I tried to run all these branches coming from these trees through a wood chipper, however, that ended up being a lot of work, made a lot of noise, and to me, I couldn’t justify doing this year after year. Of course, I could hire up a landscape company to come and trim out the trees and take out the branches but that can become very unsustainable and expensive in my opinion.

Because I can get the work done myself, I am more interested in just streamlining the operation. I also looked at the possibility of chipping up some of the excess branches in the yard and converting it into biochar. However, nothing compared to the possibility of actually burying this wood along with other organic biomass in the yard and turning it into a raised garden bed.

Step 1: Dig Out Your Trench

First, a trench must be dug which will be a reservoir to hold water. Hugelkultur beds are known for producing large yields without you doing any intensive watering through the growing season.

So, as I had mentioned before, there are many ways you can create a hugelkultur. whether you’re using large logs from cut down trees or just branches from backyard trees, wood is one of the key ingredients to making hugelkultur work. Now, it is best to add older wood into your hugelkultur that’s had the time to decompose and breakdown; usually, between a year and three years is best.

You can also throw fresh wood into a mound but fresh wood mixed with the soil will initially tie-up nitrogen. It’s important to note, however, that the nitrogen will then be re-released into the mound after some time when it begins to decompose. So, if you’re looking to plant edible crops and such in your mounds immediately, you’re going to try and use older wood upfront.

So, my hugelkultur mounds, consist of smaller logs, some larger branches and also some smaller branches, leaves, woodchips, native soil, potting mix, coffee grinds, many different materials have been used in the construction of these hugels. I also trenched down beneath these hugels about three feet on two of the mounds and filled that with hugelkultur material as well.

Step 4: Keep Adding Onto The Mound

So, in my experience, hugelkultur reduce in size by about two and a half feet. So, if I wasn’t constantly adding to these hugelkultur beds, rebuilding them, they’ll quickly reduce to a smaller mound predominately made of soil. This works out very well for me as I can add to these mounds each year as I do pruning on some of the trees around here.

As I am adding on to the hugelkultur each year, I am using mostly smaller branches and I am mostly lining the perimeter of each bed leaving the center of the mound mostly composed of soil. I then top those smaller branches with soil throughout the winter allowing the rains to soak into the mound helping to spread that soil into crevasses between the sticks. Then I’ll give them a nice covering of wood chips creating nice skin on the surface.

When it comes time for planting, I just push back the wood chips, push back some of that top layer soil, I may even add in some more soil in that spot, equivalent to maybe a 5-gallon pot worth, then I’ll plant right into that. This has shown me great results and like I had mentioned, as the mounds break down over time, it just gets better and better.

In the first two years depending on where you live, you might have to add a little bit of water to the mound throughout the summer if you have plants growing on it, which is just fine. What ends up happening is as the mounds break down, all the different biomass that made up the hugel is now composting down and marrying together and becoming like a sponge. This helps to add to even more water retention capabilities in the mound.

So, is it drought proof? No. Is it drought-tolerant? Perhaps. There are a lot of factors to consider and a lot of it has to do with how you construct the mound. Is it in full sun or part shade? Is it primarily made up of wood? Or is there plenty of soil mixed in it? Did you build it on the contour of the landscape with a swale on the side of it? All these different factors are something to consider that will contribute to your results.

For backyard gardeners with an abundance of biomass available on-site, I find hugelkultur to be a great way to create a natural loosing raised bed.