This Old House is Transformed into a Nature Themed Home with Symphony of Wood, Light, and Trees 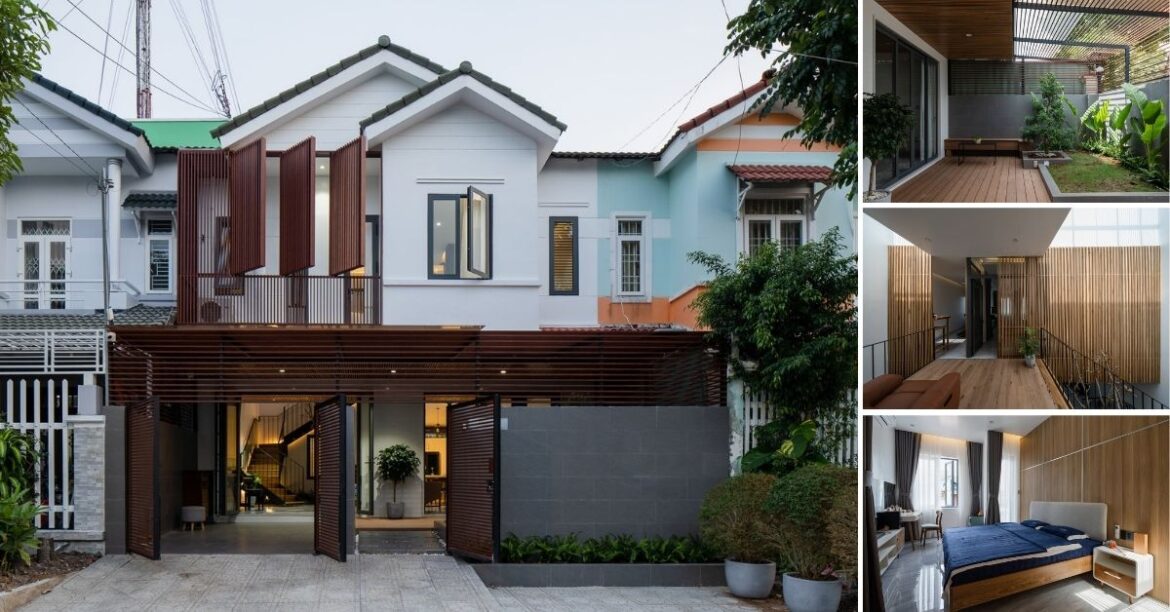 In the Kien Giang Province of Rach Gia City in Vietnam, an existing residence was renovated to incorporate natural elements like light, ventilation, and trees to improve its functionality.

The structural framework of the existing structure was retained by the design studio Thia Architecture. 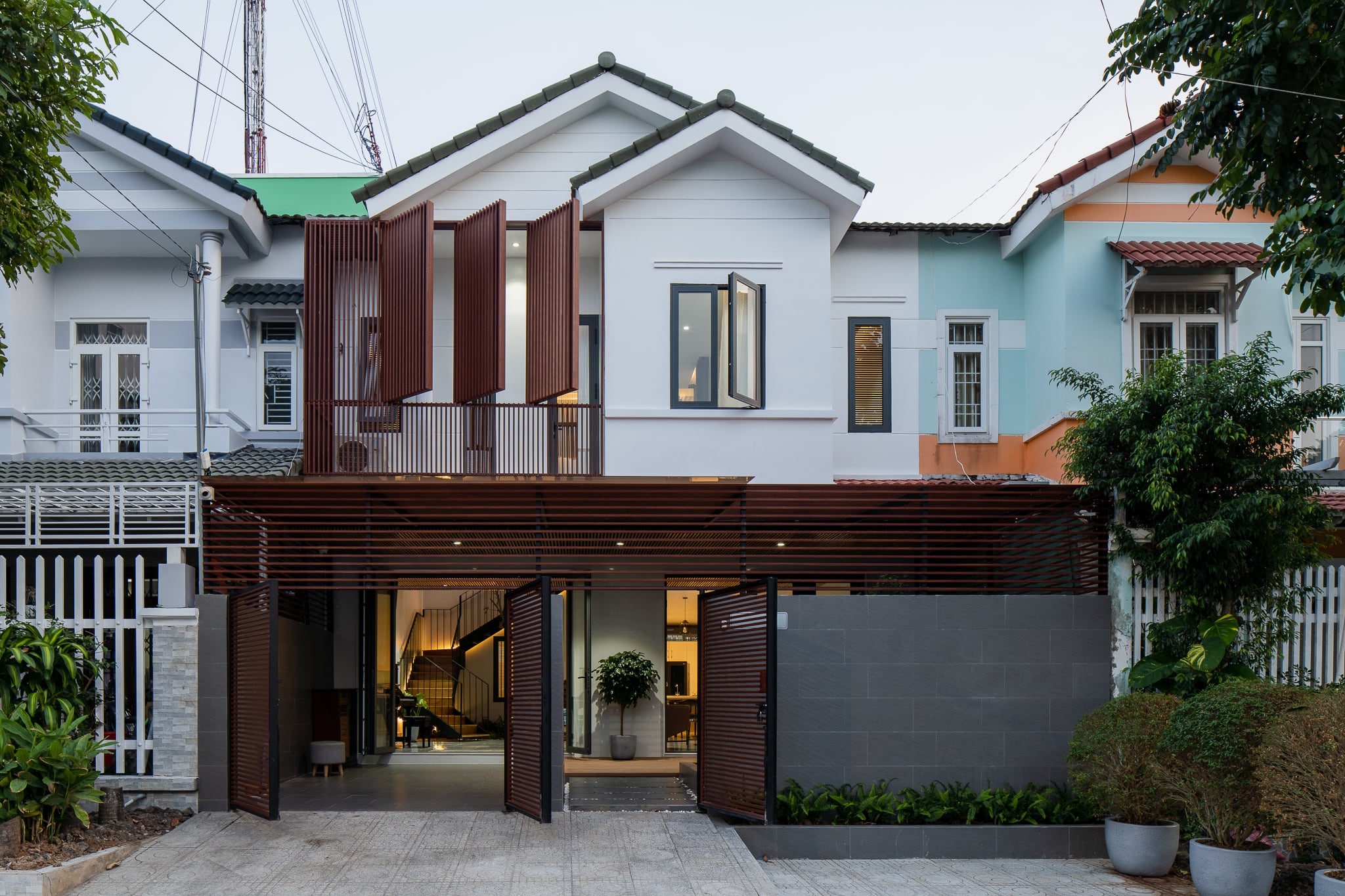 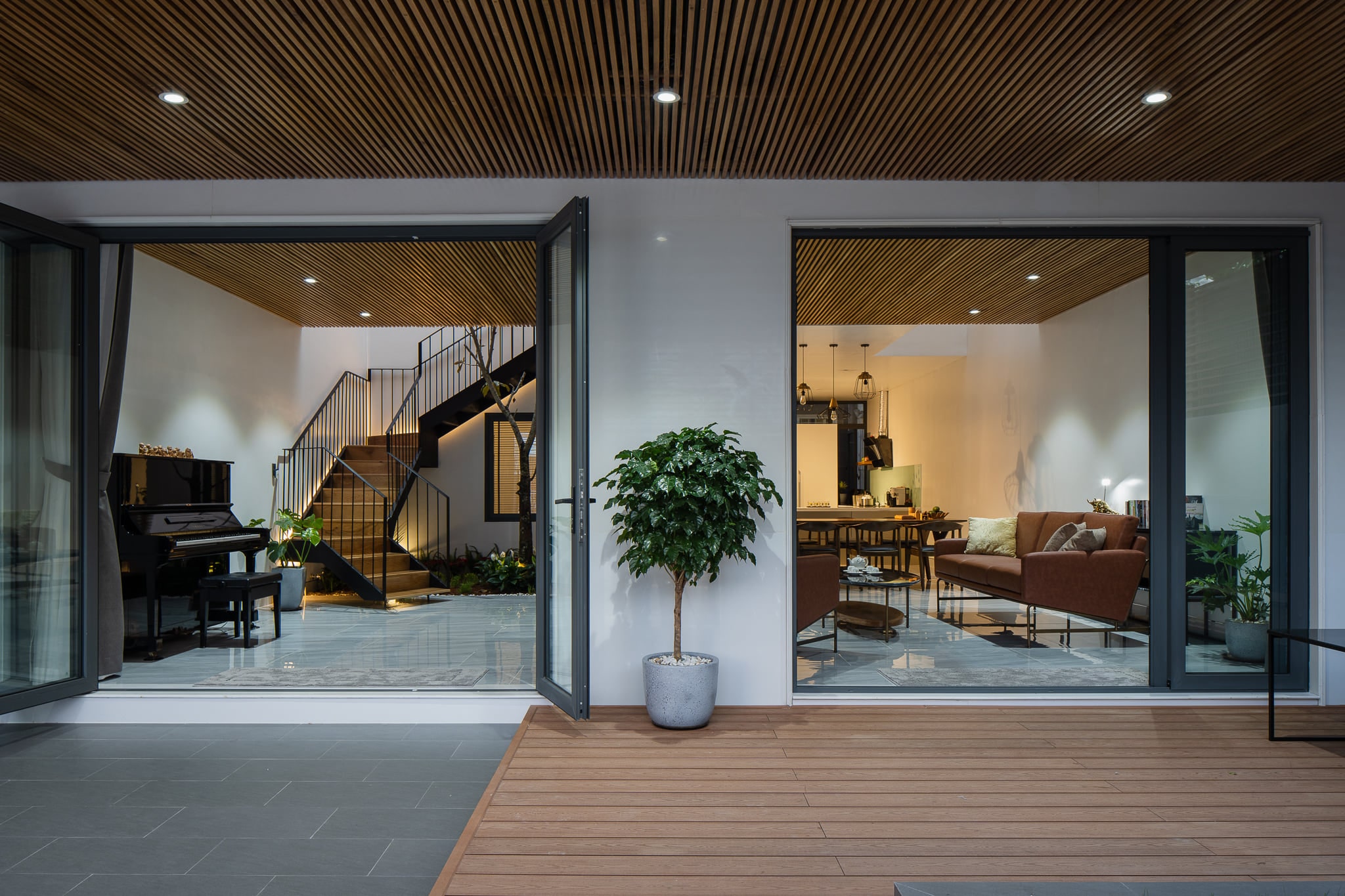 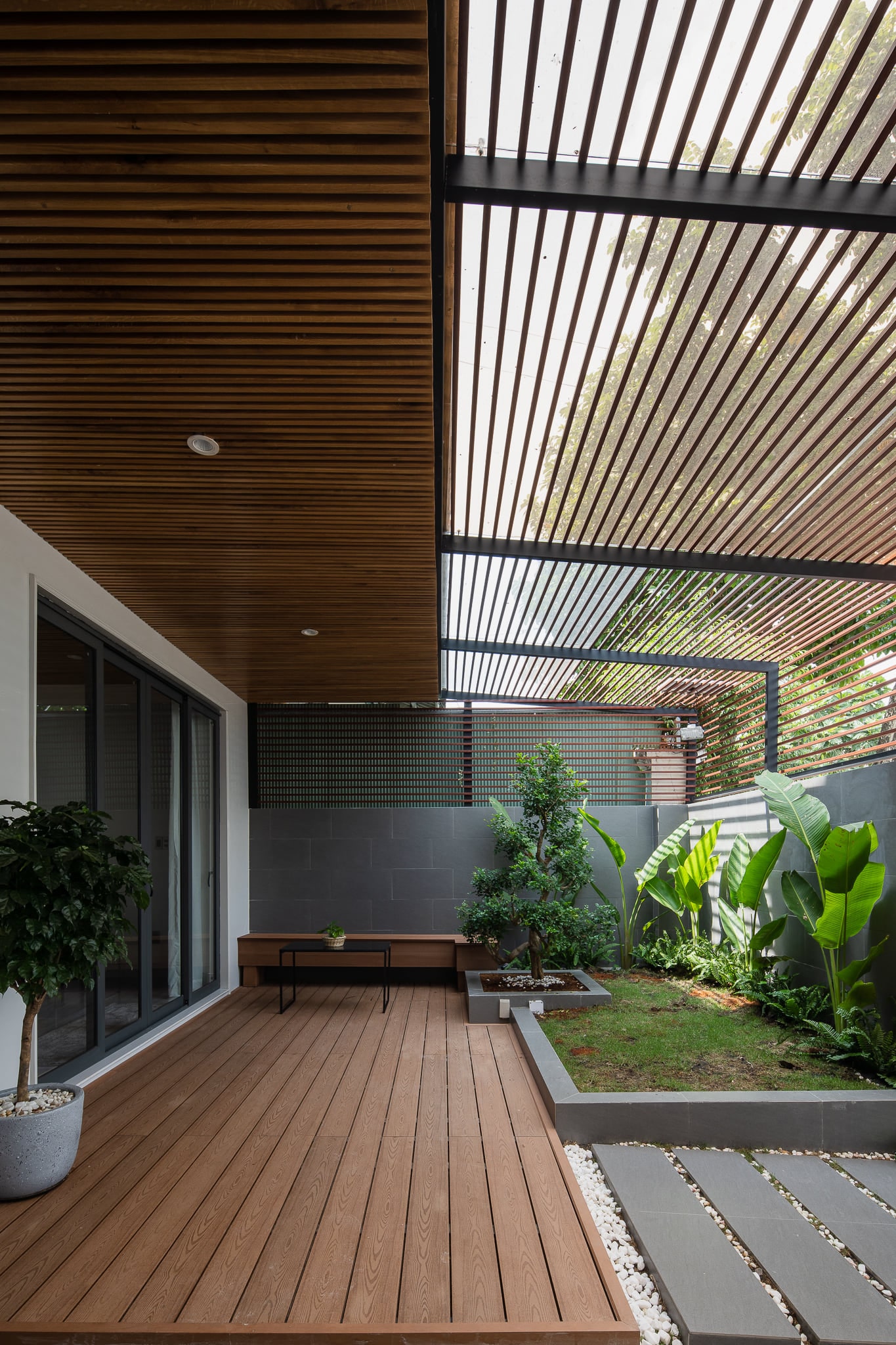 The house’s massing was then divided into two volumes, separating a large verandah from the main living spaces. A faux “bridge” connects these two distinct volumes and is represented by a series of wooden slats that cover the ceiling and beam, between the two masses with a courtyard below.

Pinewood is the predominant material throughout the house, which gives the interiors the base of an earthy palette. The verandah lets in ample diffused light while shading the more intense heat of the sun. It, therefore, keeps the house cool throughout the year.

The house’s facade features large movable fenestrations on both levels that offer ample shading for privacy while letting in light and air. 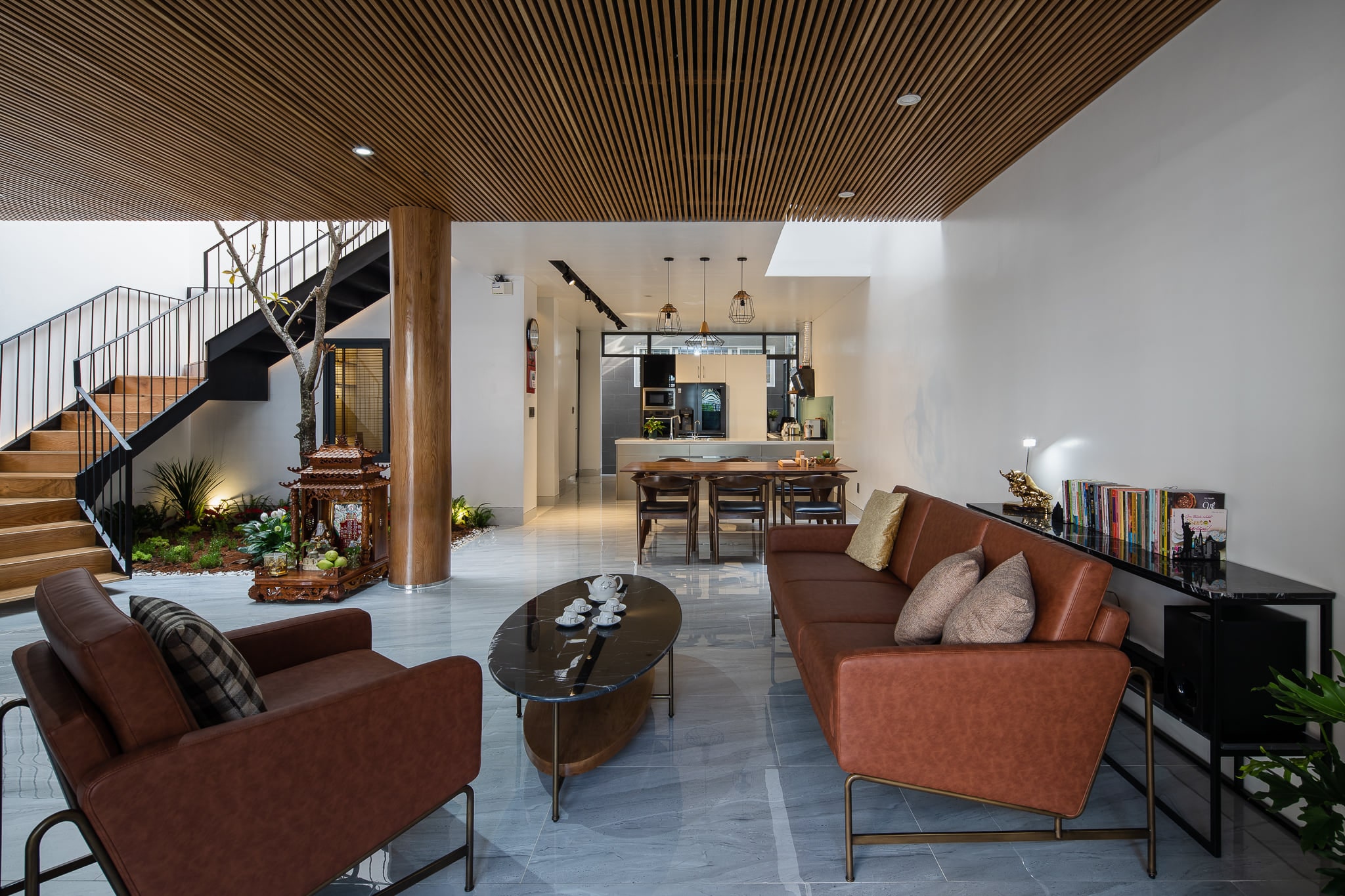 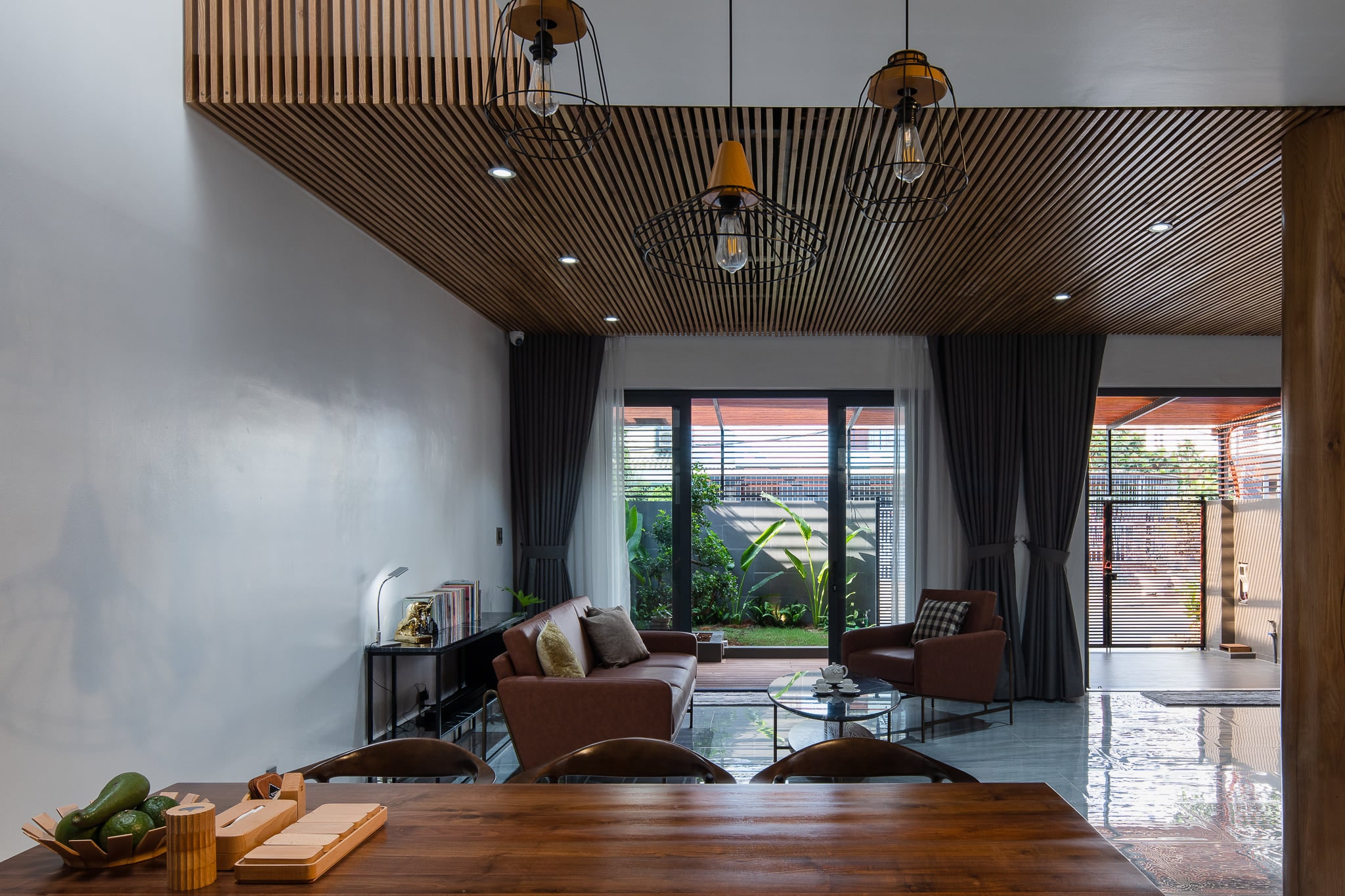 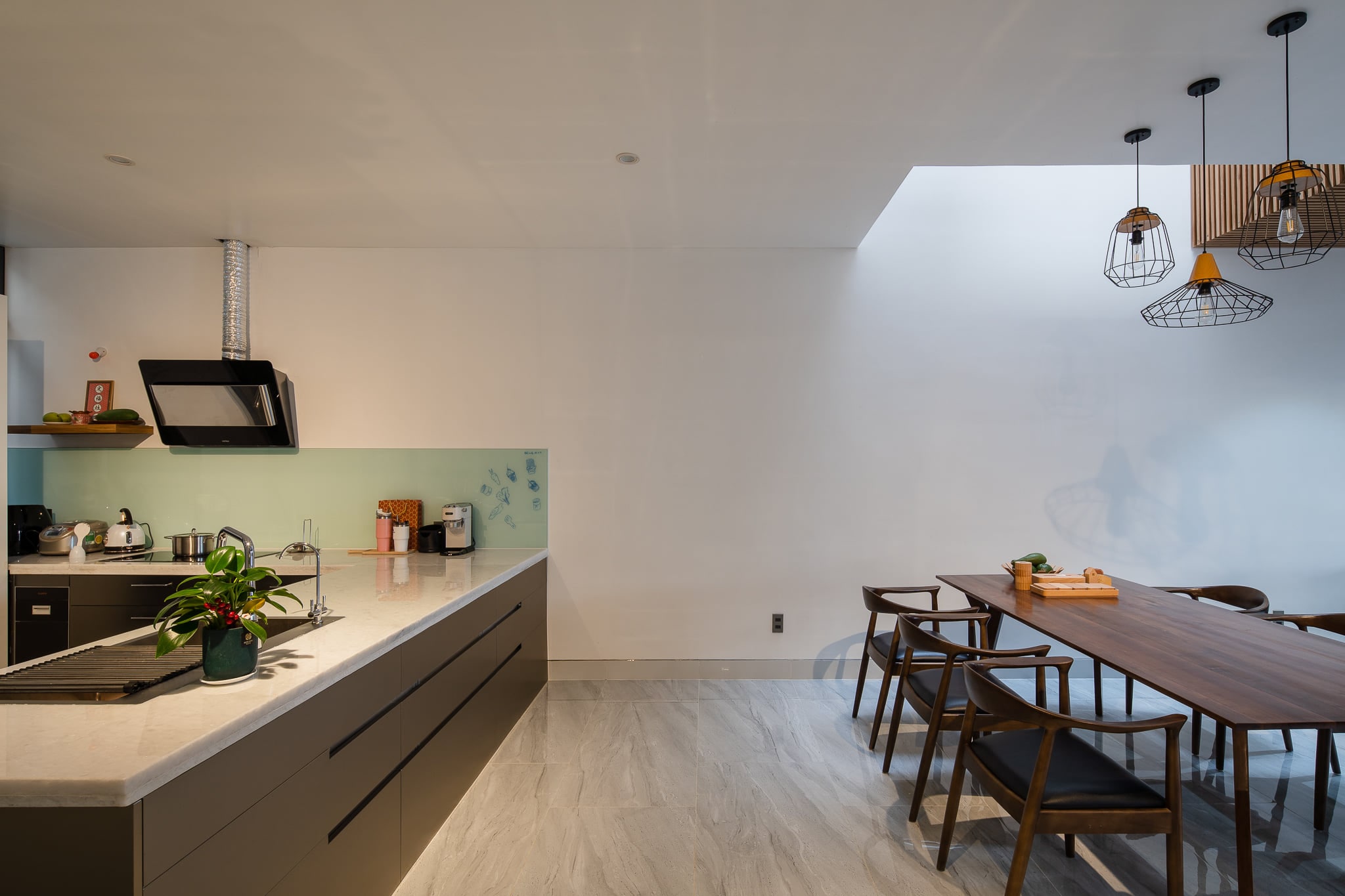 On the ground floor, the spaces have been arranged in an open floor plan, with the living room opening up into the verandah or front courtyard through floor-to-ceiling glazings.

The wooden furnishings impart an emotional note to the home, something that is complemented by the small indoor courtyard in the stairwell. 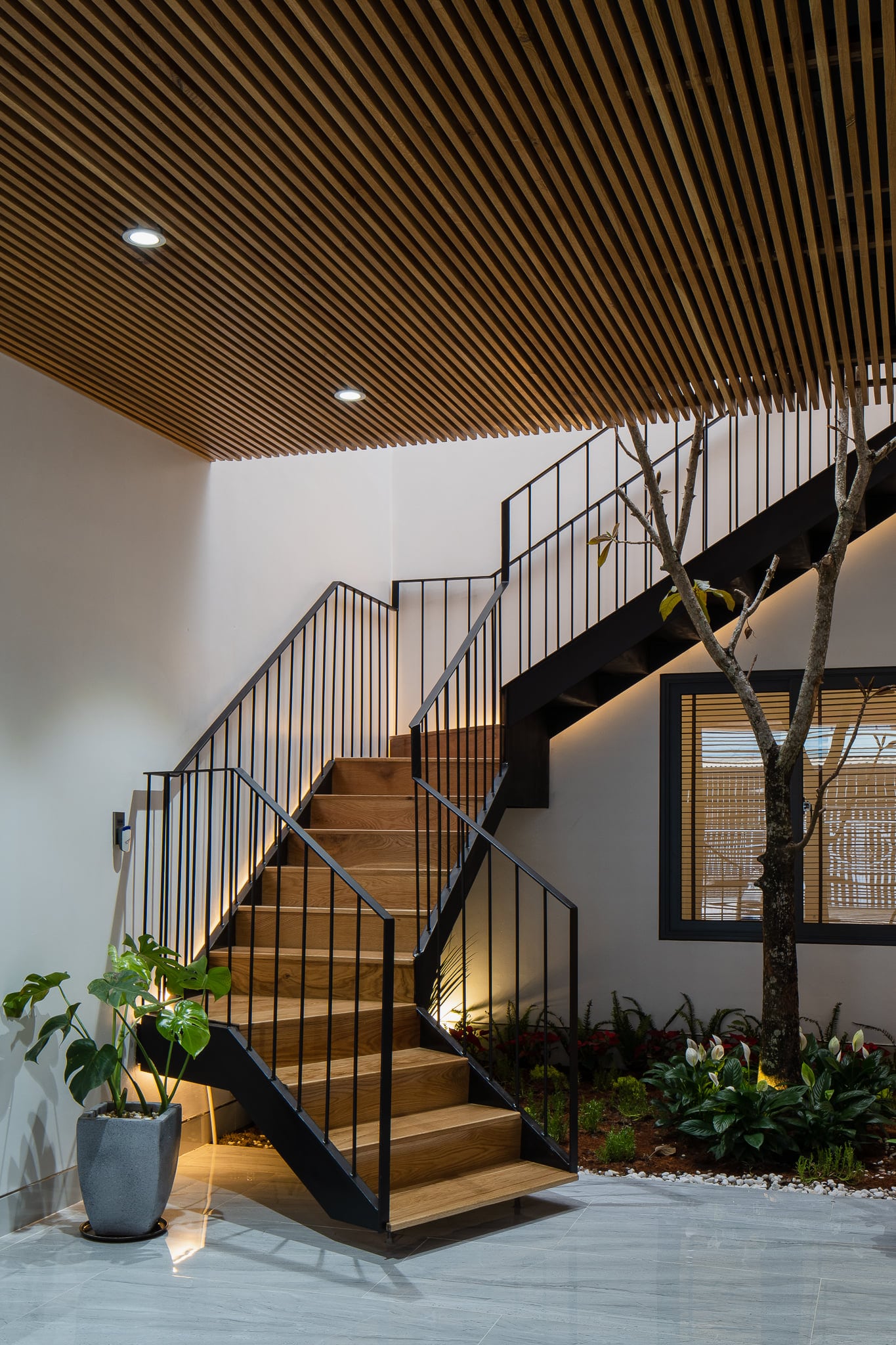 The highly polished vitrified tiles, that have a grey marble pattern blend seamlessly with the brown of the wood. The wooden ceiling of the verandah extends to the living room, therefore blurring the boundary between the two and creating an orchestrated flow of spaces.

Two skylights puncture the volumetric mass – one in the living room, and the other over the stairwell, thus illuminating the courtyard. 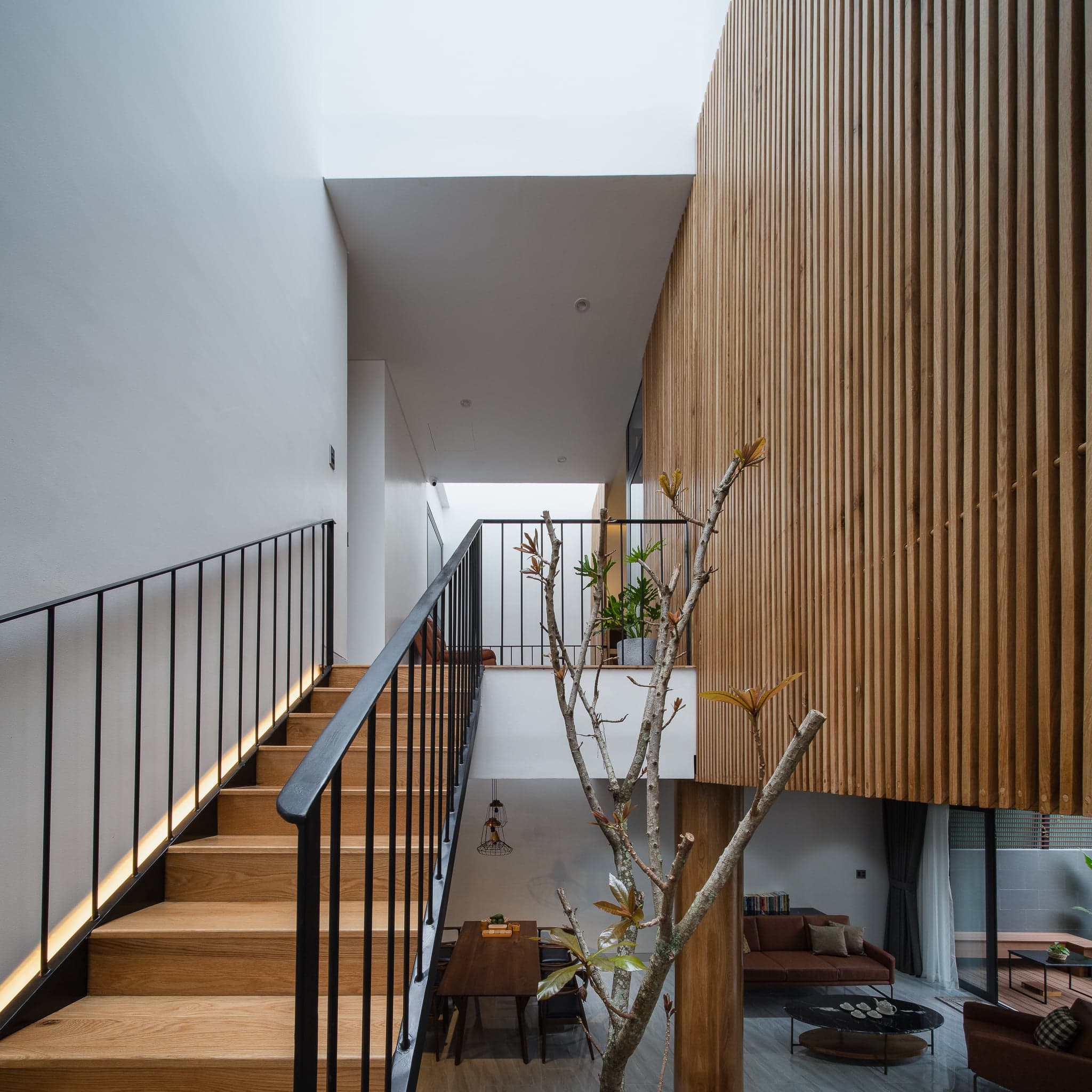 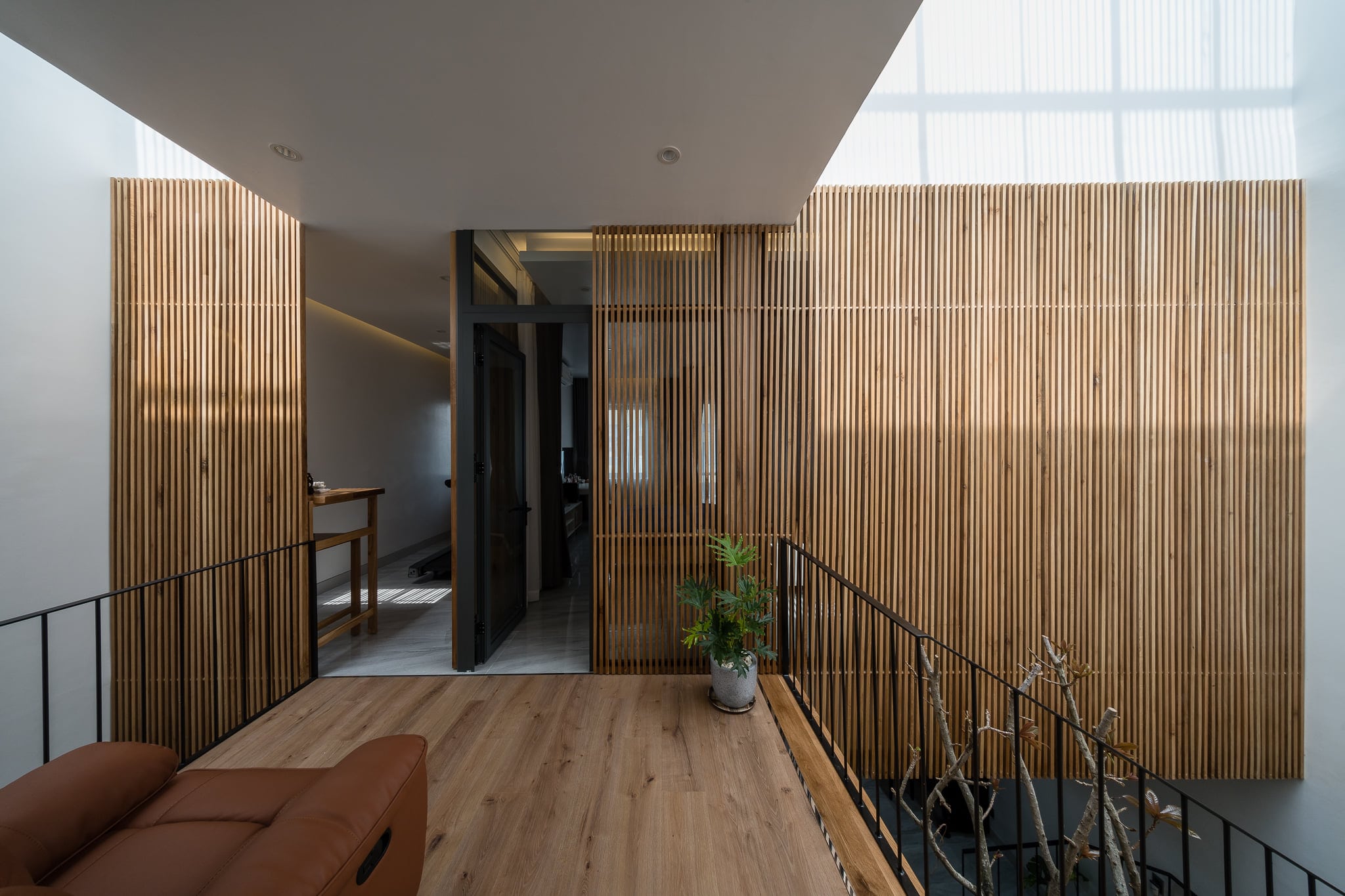 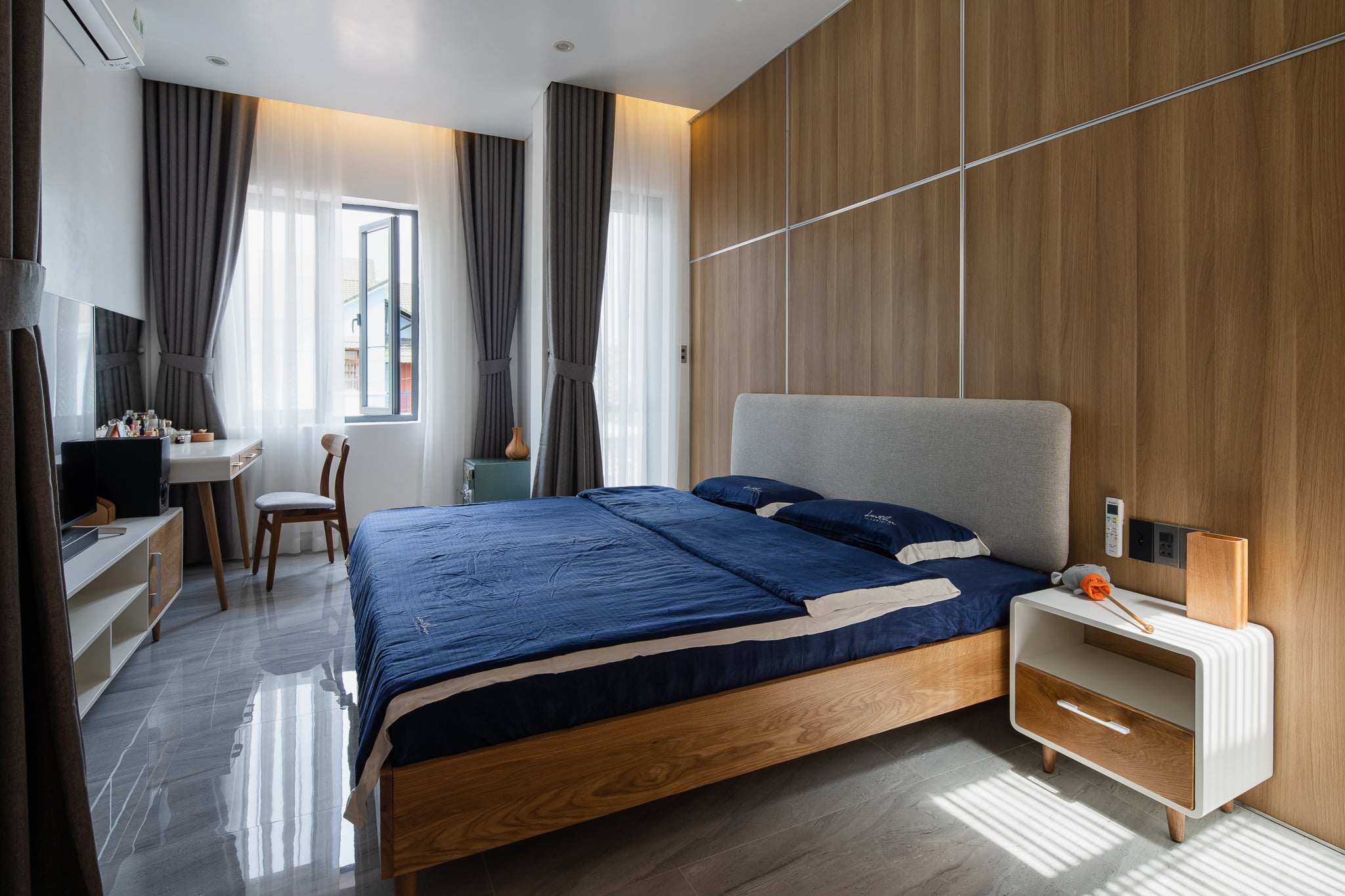 The positioning of these open masses, one at the center, and one towards the rear end of the KG house create a stack effect. This means that hot air from inside is drawn up, and let out through the raised skylight.

On the first floor, the wooden slats of the “bridge” continue on the wall that separates an informal seating area from the master bedroom. In the bedroom too, the theme of wood continues with the wood paneling behind the bed. 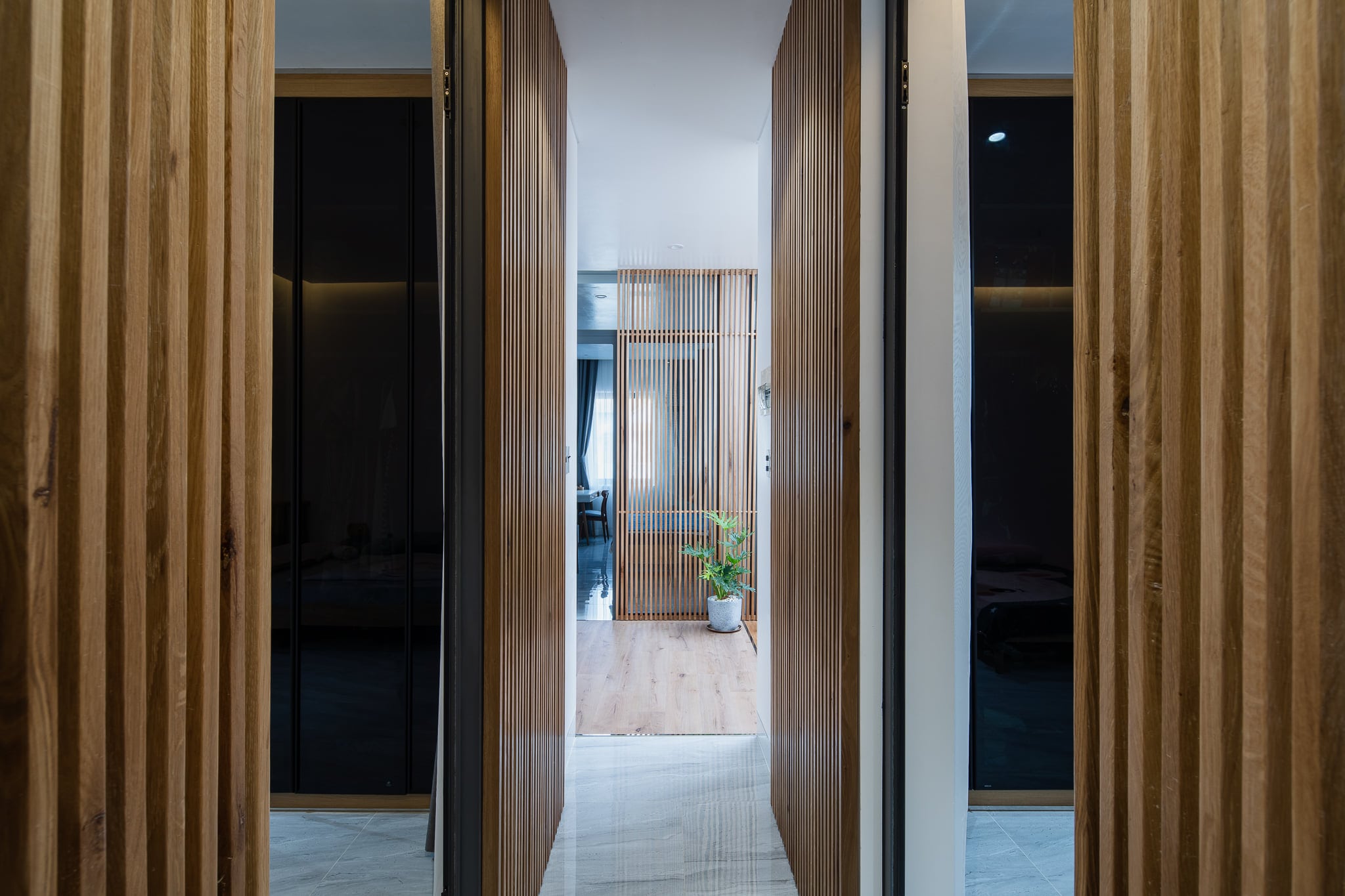 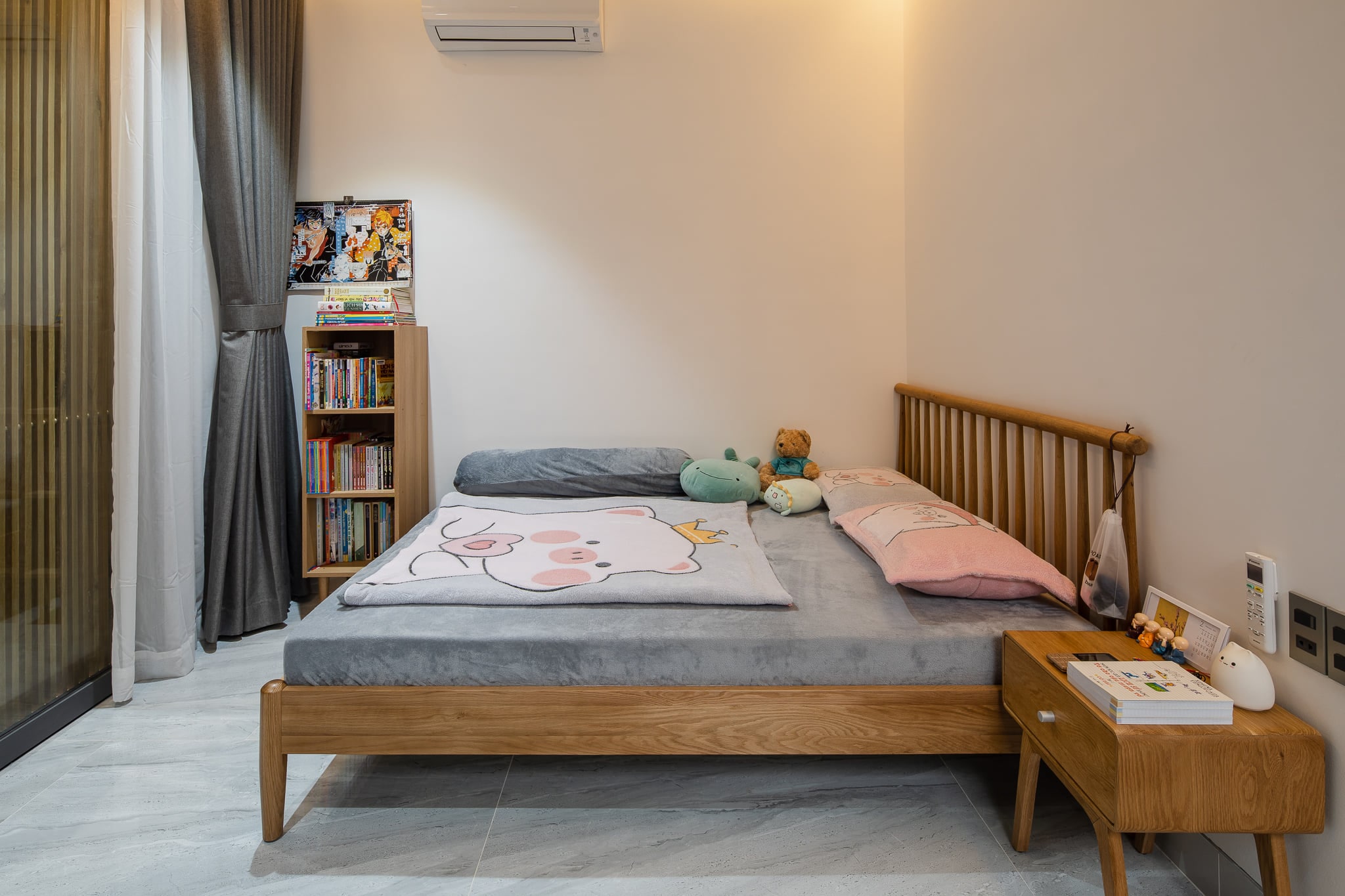 The use of wood throughout the house is balanced with the play of light and shadow, pops of vibrancy offered by the landscape, and other more toned-down materials.

It, therefore, doesn’t seem too overwhelming and instead adds a grounding warmth to the entire house.

A long passage that’s lined with slats leads to the children’s bedrooms. In these rooms, the use of wood as an aesthetic element is more muted, and instead, it is used in the form of functional, custom-made furniture for the children.

This falls in line with the architectural team’s vision to prioritise function over aesthetics while designing the home for the young family.

Conceived as a residence that would be an interplay of light, wind, and trees, KG House has accomplished this feat perfectly. By retaining parts of the existing structure, the architects have created a whole new masterpiece within the first house.

All images are taken from by T H I A Architecture unless otherwise stated.