This 30-Year-Old Row House in Bangkok Was Renovated into an Orchestrated Balance of Barrel Vaults, Vertical and Horizontal Elements 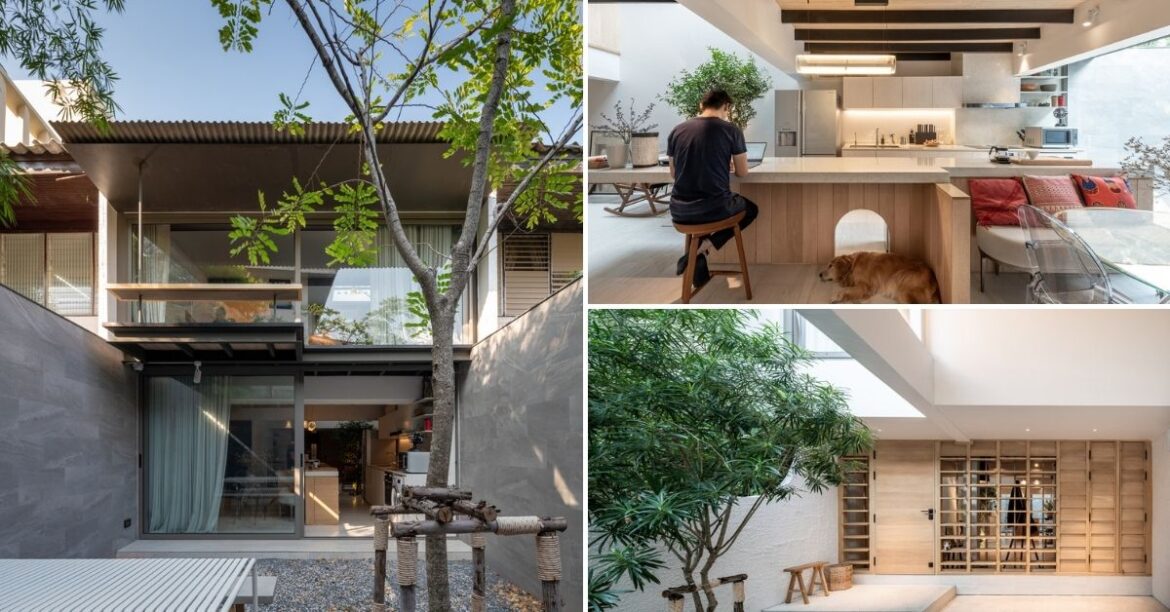 When the owners acquired Baan 96/1, a 30-year-old row house, right next to their design studio they faced quite a few challenges when it came to renovation.

The steep slope of the existing house’s gable roof extended from the first-floor master suite to the parking garage on the ground floor, thus blocking the northern light.

The toilet was located in the midsection core of the house, which meant that cross ventilation was hindered. 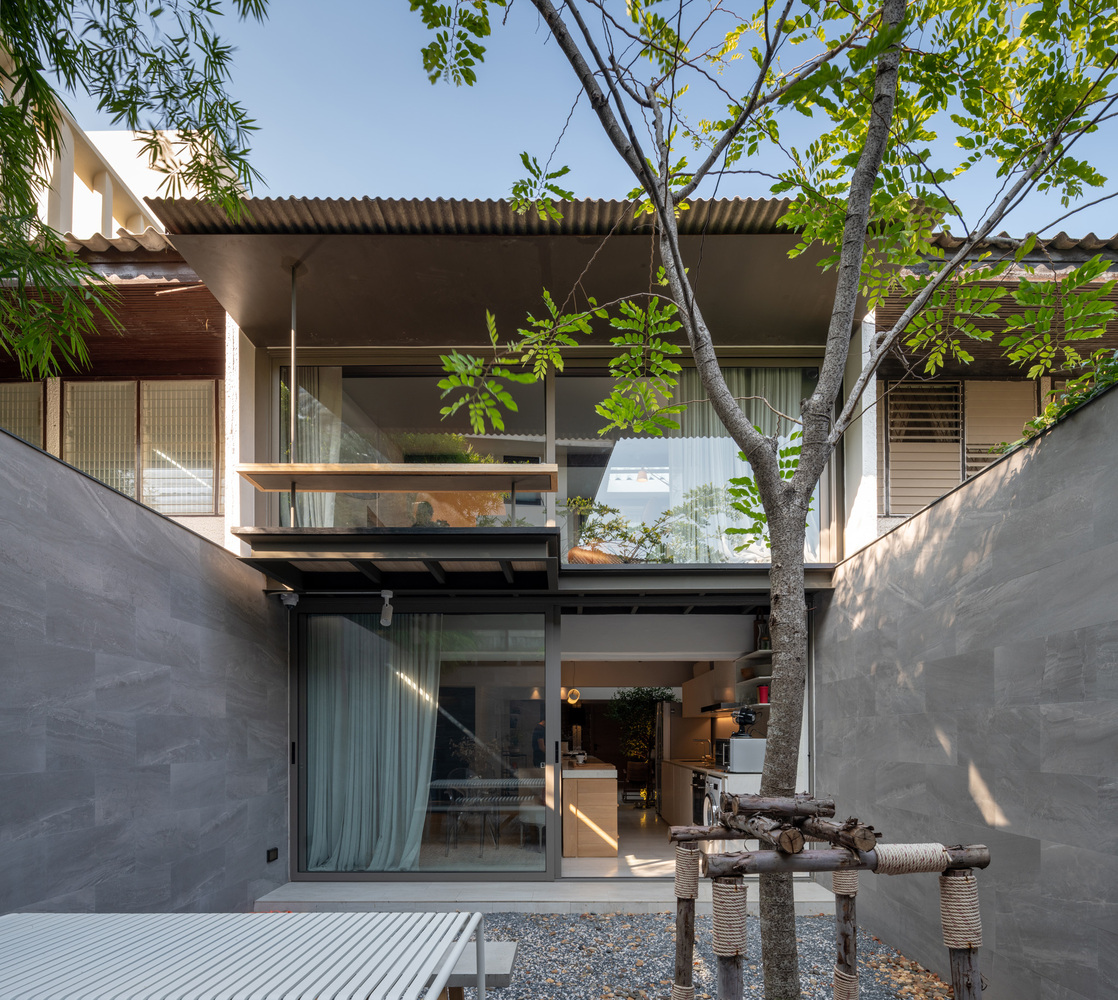 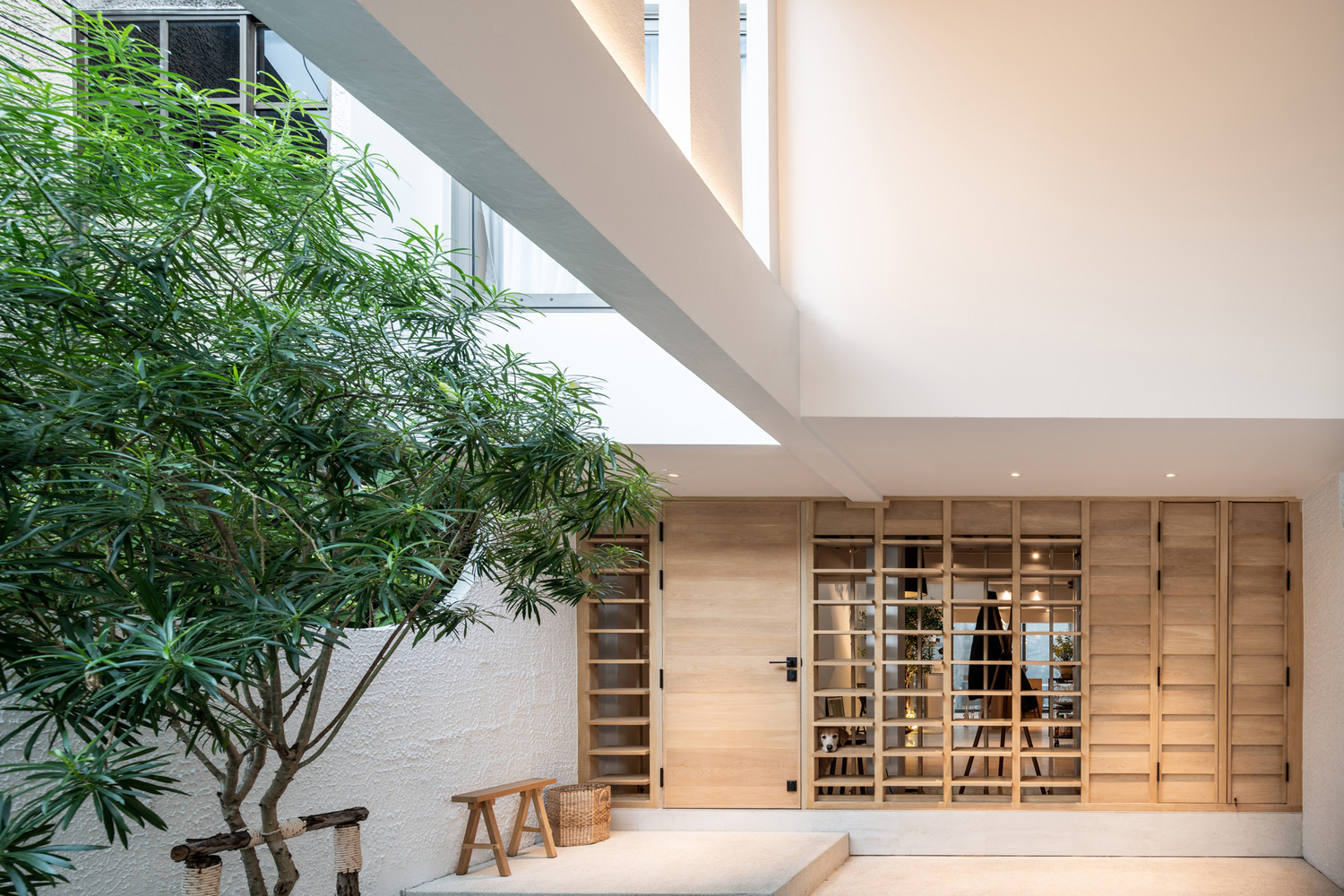 To address these challenges, and create a functional space that was naturally lit, airy and comfy, the architects decided to retain the existing exterior framework of the house, to respect the content of the site.

They then decided to demolish the interior walls and false ceiling and proceeded to rearrange the spatial configurations to enhance the utilisation of space and meet the needs of their lifestyle. 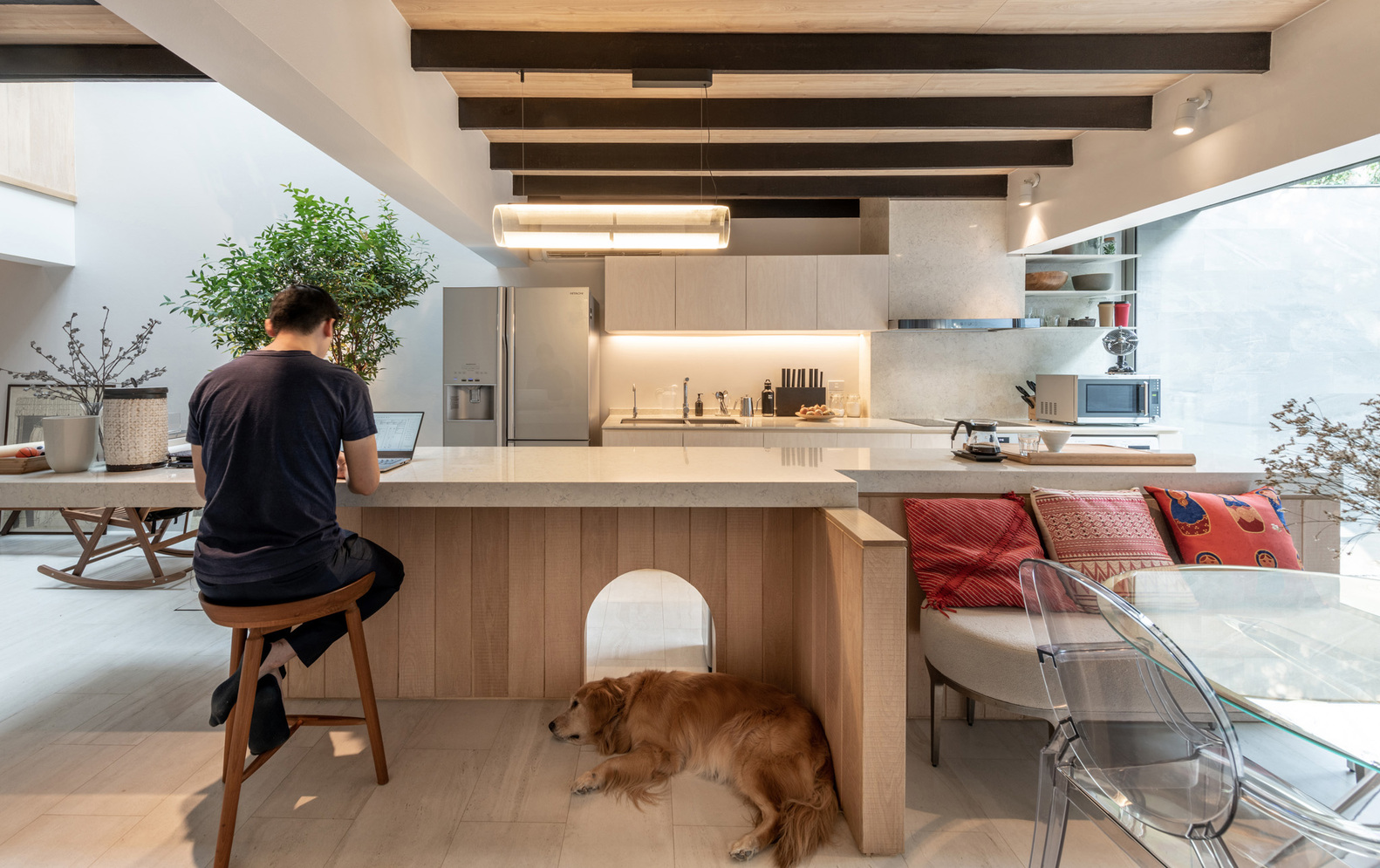 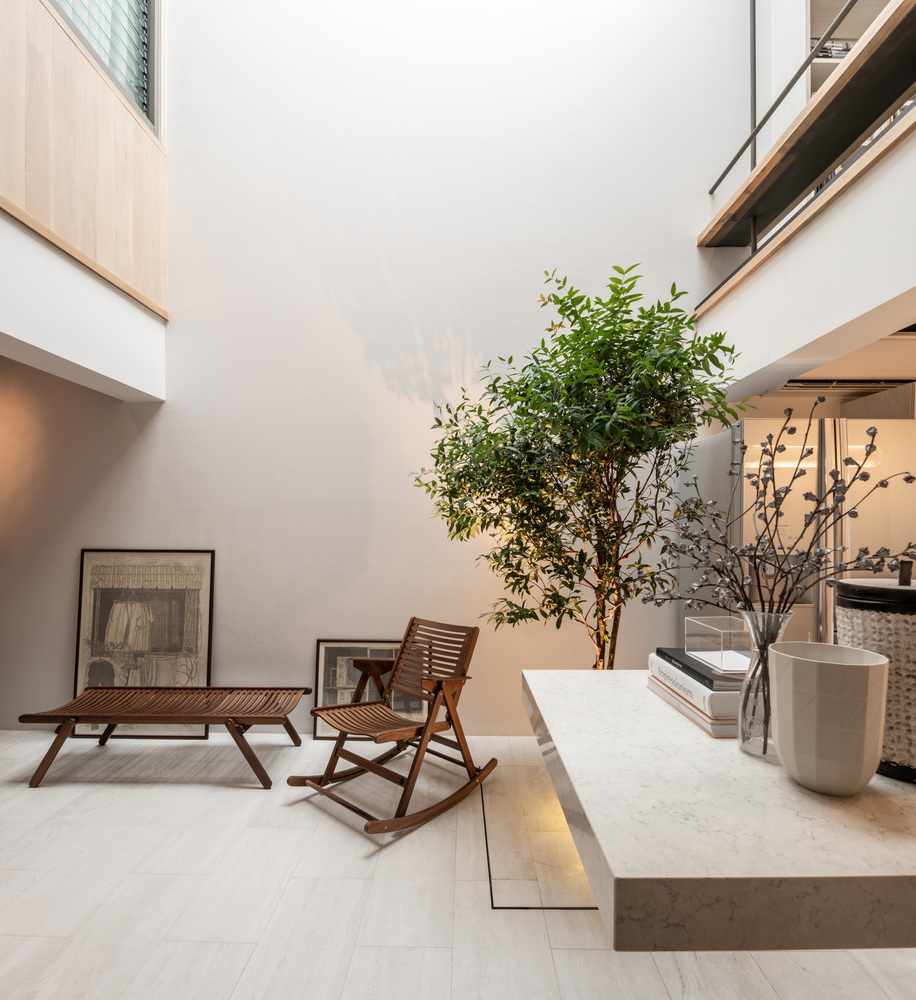 The spaces on the ground floor were arranged with the intention of creating a single, free-flowing space that would interconnect the public and semi-public domains.

This was done by placing a small green pocket in the form of an indoor, double-height courtyard with a skylight on top.

To balance out the verticality of the courtyard, a five-meter long white kitchen island was placed. The proportionally contrasting elements created by the courtyard and counter, add personality to what would have otherwise been an empty void.

The beauty of this space is that it draws the residents to engage in conversation between the separated spaces. 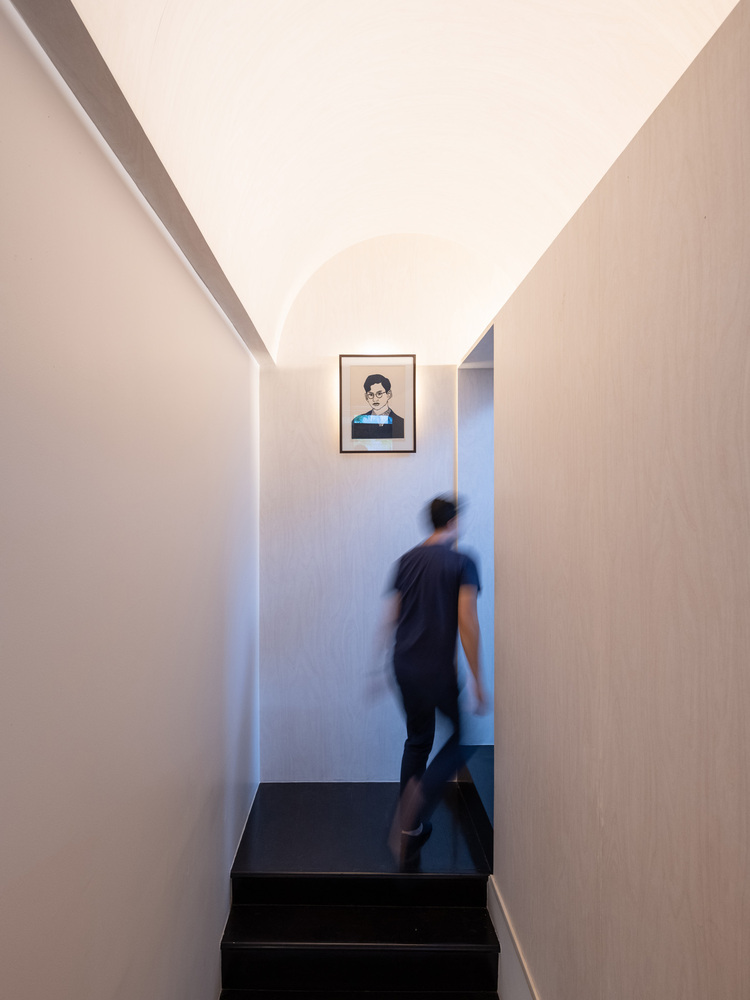 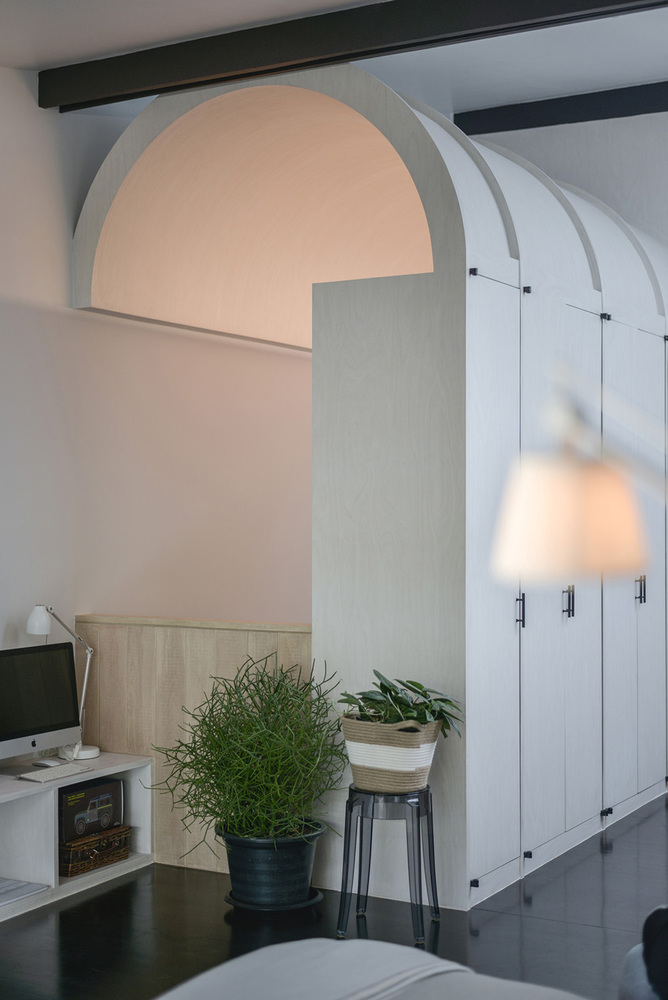 A minimalistic color palette of white and brown, sprinkled with some subtle textures has been chosen for the interiors. On the first floor too, a similar interconnected theme has been followed with the master bedroom and bathroom.

The new layout, however, confined the bedroom with only one small window that connects it to the outdoors. To counteract a claustrophobic atmosphere, the architects ingeniously raised the height of the room with a simple realignment of the false ceiling along the gable roof’s slope. 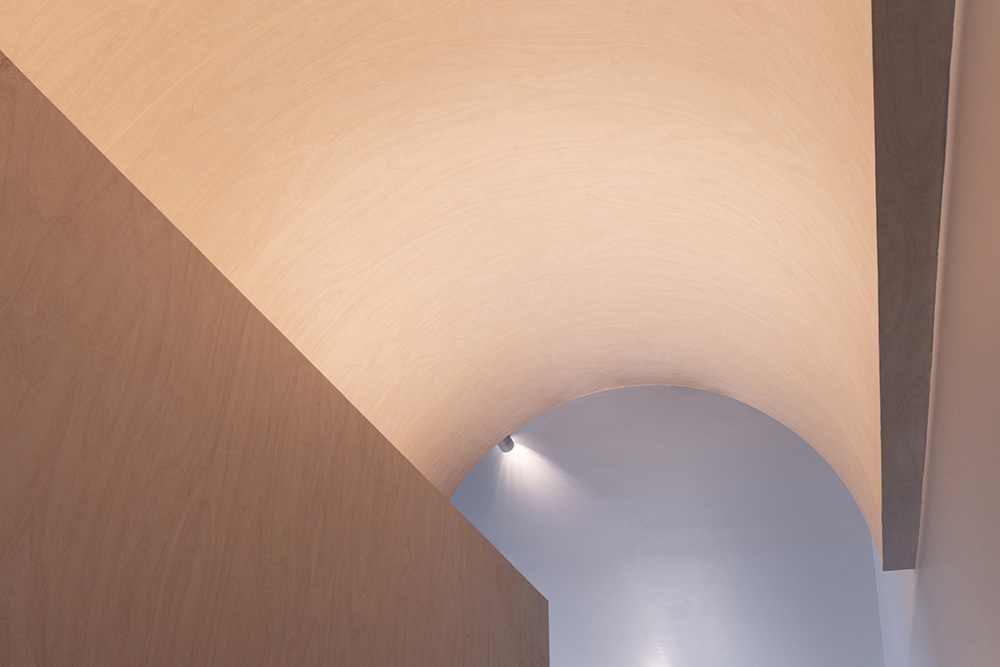 This revealed the true geometry of the room, which imparted almost ethereal energy to the bedroom. The bathroom wall was not erected to the full height, so as to not dampen the mesmerising effect that the renovation had on the bedroom.

Instead, the bathroom features a barrel vault, akin to the arch decoration around the facade of the house. By transforming the bathroom into an extruded barrel vault, the master suite became more spacious, and the intersection between the gable roof and barrel vault adds a mysterious character to the room. 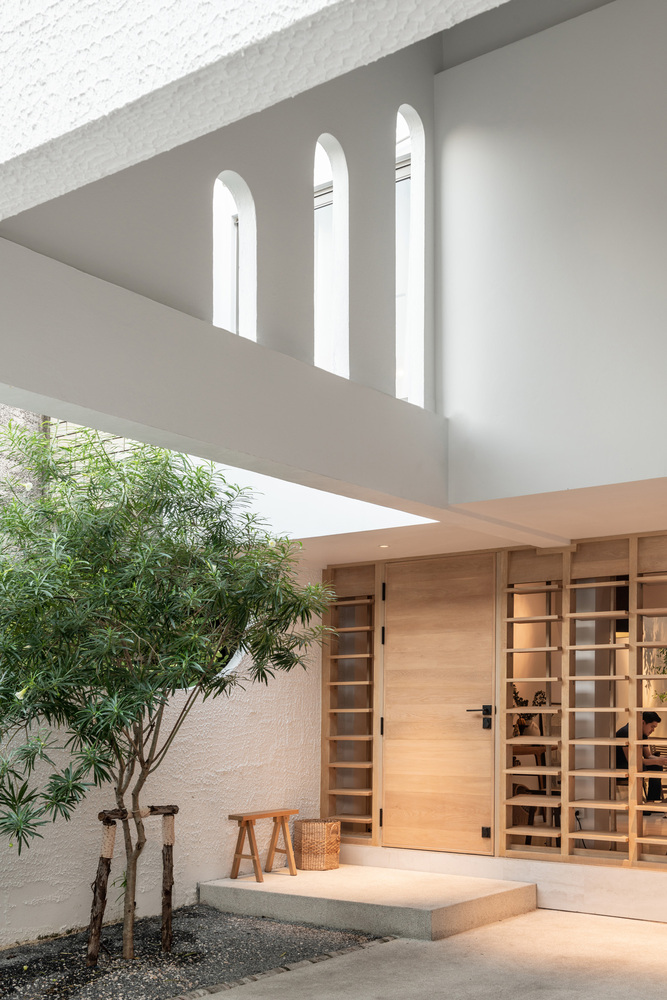 Inspired by the barrel vault, the architects merged the staircase and storage system into the vault geometry.  Anonym designed the 961 House in a way that reflects the ideology of its practice.

The main idea behind the house was to forge a lasting effect of peace inside the living spaces, and this magical feeling was achieved by carefully crafting elements and masses to produce a subtle, yet meaningful effect.

All images are taken from by Anonym unless otherwise stated.